Community groups in Montreal say a better police unit is needed to address increasing hate crimes in the city.

Vivian Doan recently asked her Vietnamese mother not to go out by herself — the first time in decades of living in Montreal they’ve had to consider their safety.

Above being a bit scared, Doan said she’s confused. She’s experienced racism for as long as she can remember, but mostly in the form of stereotypical comments, like being made fun of for her appearance as a child, and later being told to “go back home” by a man on the street. It wasn’t until COVID-19 arrived and an ensuing rise in anti-Asian racism in Quebec that the issue seemed to take on a more violent form.

“I keep on feeling that Montreal is not the States, so we’re OK,” Doan said. That changed when she read a story about a Korean Quebecer who was attacked with pepper spray recently in the Plateau, where Doan lives. “I just don’t know what’s happening. So, I told my mom a couple of days ago, please, please don’t go out alone.”

Since the pandemic, attacks on Asian temples, stores and people have been well-documented in Quebec. The Commission des droits de la personne et droits de la jeunesse opened 14 files for discrimination or harassment toward East Asian people in 2020, compared with only one in 2019.

“I think there could be a link (to COVID-19), of course, because we know there has been a lot of reports of racist incidents in the last year against members of the Asian community,” said Meissoon Azzaria, CDPDJ communications coordinator. She added the data is usually “the tip of the iceberg” because people tend not to file reports.

The increase is also noticeable through Montreal police data: 22 hate crimes and eight hate incidents against Asian people were reported in 2020, compared with only three of each in 2019. Another eight hate crime reports were filed in the two first months of 2021.

Of the reports in 2020, the SPVM said it suspects 10 of them are linked to COVID-19. About 40 per cent of the total were crimes against property, like the vandalism in Chinatown.

“Important actions were taken during the pandemic to increase the police presence in Chinatown as a preventive measure, but also to encourage any potential victim to denounce these unacceptable events,” the force said. 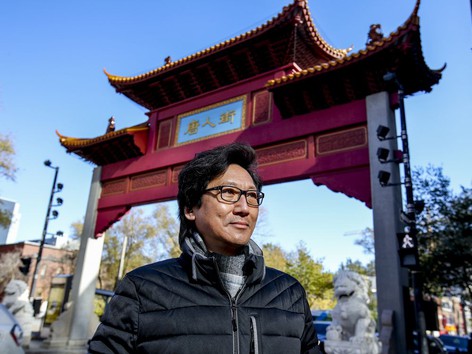 The action in Chinatown was the result of months’ worth of requests from Jimmy Chan, Chan Association president, who took it upon himself to patrol the streets until two Station 21 officers were assigned in November.

“I formed the Montreal Chinatown security patrol team,” Chan said. “It started in early August, all the way until Christmas last year.”

The patrol team operated on a volunteer basis and when the officers were assigned to Chinatown, they patrolled during the day, but they were needed at night.

“That’s when all the bad people come out,” Chan said, adding the operation lasted about a month.

Amid the rise in anti-Asian racism in Quebec — and an increase in hate crimes targeting other communities — groups are calling on the city of Montreal to create a better unit within the SPVM, one that is adequately staffed, able to properly identify hate crimes and respond to the needs of diverse communities. Councillor Marvin Rotrand presented a motion to this effect to city council last week.

“We only have four officers … in the sub-unit that works on hate,” he said during a news conference leading up to the meeting. “We’re asking for far more, to give them the funding and the officers to allow them to do outreach to the community.”

The motion was sent to the Commission de la sécurité publique for study.

“Hate crimes are obviously a very important subject that deserve to be studied, but we’re not going to redesign the hate crimes unit of the SPVM on the floor of the Montreal city council,” said Alex Norris, Projet Montréal city councillor and chair of the Commission de la sécurité publique.

Rotrand fears the study won’t be complete before elections in November. The decision to study the motion seemed strange to him; the SPVM has no issue with its contents, he said. (The force declined to comment when contacted by the Montreal Gazette.)

Asked what it’s doing in response to the issue, the city of Montreal simply said the office that handles racism works closely with the SPVM’s hate crimes unit to make procedures clearer for citizens.

“The public is invited to take any hateful incident or act seriously and to report them to the police authorities,” it said in an email. “Civil society organizations, citizens’ committees, networks and community organizations can also support people who wish to file complaints about hate crimes and incidents.”

Community groups who backed the motion reacted swiftly to the decision.

“We are deeply disappointed that city council did not vote in support of Councillor Rotrand’s motion calling for a more effective Hate Crime Unit in the SPVM — barely two days after the march where city officials spoke out against anti-Asian hate crimes,” said Fo Niemi, the director of the Centre for Research Action on Race Relations.

“In the end, they did not walk the talk and chose to stay with the status quo: that is, a hate crime unit with no police officers from the communities targeted by hate, and no comprehensive data collection and reporting, among other things.”